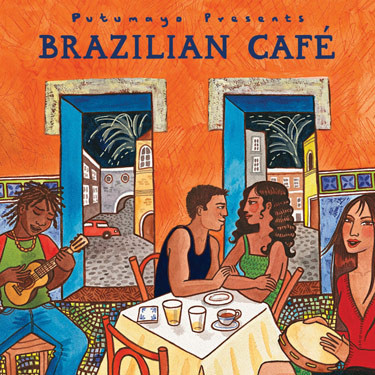 On July 28th, Putumayo will release Brazilian Café, an enchanting addition to its Café series. Brazilian Café brings together a captivating selection of samba, bossa nova and jazz by Brazilian stars and up-and-coming talents. In the early 1960s, legendary Brazilian composers Antônio Carlos Jobim and Vinicius de Moraes hung out in an Ipanema beachside café where they would often see a beautiful neighborhood girl, Helô Pinheiro, walk by. She became the inspiration for one of the most popular songs of all time, "Girl From Ipanema." The global bossa nova boom can be traced to that moment of musical inspiration at a Brazilian café and most of the artists on this CD drew inspiration from Jobim, de Moraes and other songwriters who followed. Brazilian Café includes songs by legendary singer and songwriter Djavan and jazz star Rosa Passos. The album also features songs by talented artists such as Paris-based songwriter Márcio Faraco, samba revivalist Teresa Cristina, electro-bossa hipster Katia B and eclectic vocalist Ceumar, all of whom have had songs on other Putumayo collections. As with all Putumayo CDs, this collection features songs that have not been released outside of the country of origin by exciting young talents such as Italy-based Toco, Salvador natives Alexandre Leão and Carlinhos Cor Das Aguas, bossa singer Marcia Salomon, and Rio's Arranco de Varsóvia and Ana Costa, who are among the hottest new voices in samba today. A portion of Putumayo's proceeds from the sale of this CD will be donated to Terra dos Homens Brazilian Association, which promotes children and adolescents' rights.