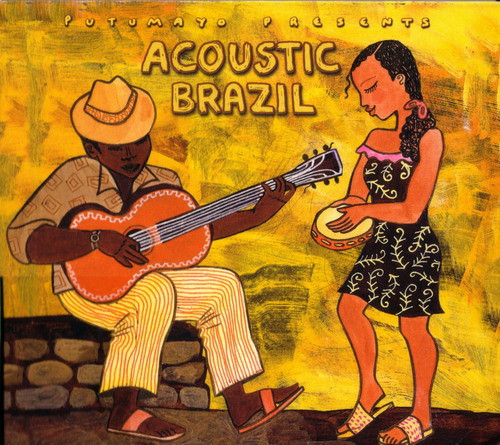 During carnival in Rio, the streets vibrate with the thunderous beats of the samba schools, their energetic rhythms persuading even the frail to dance. After the parties have ended, though, Brazilians start playing the softer, more introspective music for which they are also renowned. Just as the Brazilian carnival season is winding down, Putumayo presents Acoustic Brazil. While upbeat rhythms like samba, forró and axé have people dancing in the streets during carnival, Acoustic Brazil focuses on the more delicate Brazilian music that comes to life in the aftermath of the party.
As the birthplace of Antonio Carlos Jobim and other masterful songwriters, Brazil has given the world some of its most entrancing melodies. Acoustic Brazil includes songs performed or written by some of these great figures, as well as others from the emerging young voices of popular Brazilian music. Legends such as Caetano Veloso, Chico Buarque, Gal Costa and Paulinho da Viola are featured here alongside a new generation of singers who demonstrate the beauty of Brazil’s acoustic music traditions.

Acoustic Brazil is the latest addition to Putumayo’s popular series of Brazilian CDs (Brasileiro, Samba Bossa Nova and Brazilian Groove), which have sold half a million copies combined. From the gentle swing of bossa nova and samba canção, to the lyrical grace of contemporary singer-songwriters, Acoustic Brazil presents some of the most beautiful songs from Brazil’s unique musical legacy.